About a century ago, the majority of the British population earned their bread by toiling long hours in the factories, only just able to keep themselves afloat, under the grasp of the obscenely-wealthy bourgeois. Where disaffection would appear commonplace and poverty was accepted as the standard, proletarian rebellion, even communist revolution on the streets of Manchester or East London would seem entirely possible. So much so, in fact, that Marx himself regarded England as the most likely candidate for such a revolution to occur.

Today, the small island off the North-western coast of Europe is certainly a changed one. The traditional image of the London Docklands as a sprawling mass of smog-ridden factories has been replaced by that of an economically-prosperous, market-thriving metropolis. The prospects of socialist revolution today may seem a ridiculous idea, but recently, a whole new wave of ‘revolutionary’ populism has arisen.

Who are these twenty-first century revolutionaries? And, more importantly, who exactly are they fighting for?

Russell Brand, the actor and comedian recently ranked the fourth most influential thinker by Prospect magazine, has become a voice of revolution in the United Kingdom, an idea that attracts many. Leftist culture among the student population has always been present, yet today it seems that radical ideas have taken a turn worth mentioning. Now, individuals like Brand alongside ‘Anonymous’, a network of associated activists, have taken to protest and public demonstration. Against what, it isn’t always clear, but their broadly liberal and socialist aims seem to point to something larger than their cause, this being a general shift in attitude, with radicalism starting to make a slow reappearance in the country. 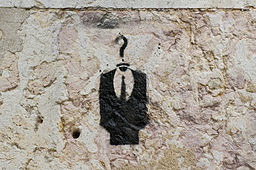 Anonymous’ signiture logo portrayed in the form of street art

As I’ve previously mentioned, our capitalist enterprise was, not so long ago, a worker-dominant state under the shackles of the capitalist giants. Such a transformation, from this situation to the present one, was made peacefully, during the process of ‘de-industrialisation’ which the country has experienced. These demonstrations, however, are small reminders that the revolutionary culture has not deserted society. And of course, every revolution needs a target, so once again we are forced to realise that the achievement of human rights, liberty, and justice for the oppressed in Britain, is by no means complete.

Yet should it be the task of Russell Brand and all the alike to complete it?

I recently came across an organisation in the UK known as the Revolutionary Communist Group (RCG), who, in a video, pointed out that the Labour Party has betrayed socialism and no longer represents the working class as a whole. Now, this ‘revolutionary’ movement has embraced populism in a similar manner, and it’s just a case of whether or not they will do justice for those they represent. Today, I don’t feel I need to spend a great deal of time discussing why the Labour Party in Britain have turned their back on true leftism, an issue on which I agree with the RCG. Will the new branch of ‘revolutionaries’ do the same? Judging by their superficiality, their lack of direction or dogmatism, and their somewhat casual attitude towards the revoution, I’d say so.

Whilst ‘the Labour Party clearly demonstrates such misrepresentation, I believe it’s only one example; whilst Britain has been entirely transformed over the past century, it seems those who truly deserve justice have simply been transferred from one manner of life to the next, with their political and social representation taken care of by those above them in the economic pecking order. If anybody wants to see a difference made to British society similar to that which these liberal and socialist organisations advocate, this must change. Revolution must lose its superficially-attractive shine, and activism will take on genuinely-motivated qualities.

Though I don’t necessarily believe members of other classes cannot partake in or assist the socialist movement (if this was the case, how would movements such as the Bolsheviks in Russia have managed to seize power?), we could learn a lesson from Karl Marx, who stated that ‘the emancipation of the working class must be the work of the working class itself’. If such an idea was applied in Britain, real change might just occur.

The featured image was provided by KylaBorg from Wikimedia Commons. Here is a link to the image’s licence:

The image depicting Anonymous’ logo was provided by r2hox from Wikimedia Commons. Here is a link to the image’s licence: