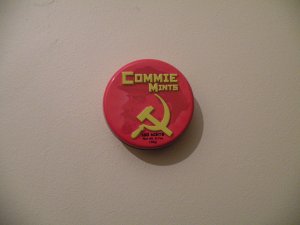 Best part about them: Made in China 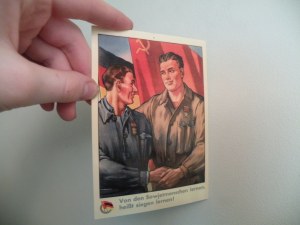 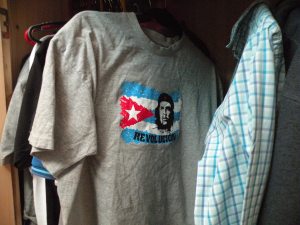 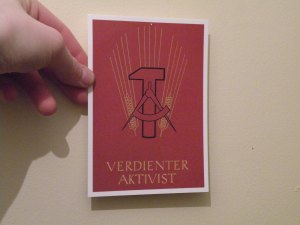 Since everything I’ve posted so far is fairly dense, I thought I’d post something slightly more light-hearted. It would make a perfect opportunity, I’ve decided, to address an issue that’s been on my mind lately: if communism exists to dismantle the capitalist mode of production, and tear down every corporate empire on the face of the earth, then when and why has communist imagery found its way into the market?

The jokes surrounding Che Guevara T-shirts are an example of the extent to which this is happening, yet the printing and selling of these T-shirts, whilst perhaps so, well, blatantly wrong to have attracted attention, is not the only example. The market today is full of these products, from Commie Mints to Maoist messenger bags, and they’re not always where you’d expect. Whilst the postcards shown above were bought from the DDR Museum in Berlin, the T-shirt came from a village market in the south of France, the mints from a branch of the sweet shop Candy Hero.

The deliberate commercialisation of such icons is actually just the start, for images such as the red star have been sold in a subtler way, probably without deliberately selling the communist associations it has. It just goes to show the variety of meanings these images can posses, all depending on the person viewing them: even to the extent at which it becomes a corporate branding technique and an icon used by anti-corporatist revolutionaries.

Yet what really puzzles me is how the capitalist world can endorse communist imagery in such a way. Yes, it’s joked about, but not in a way that seems nearly sufficient given what the industry is actually doing. It also seems as if, by promoting the ideas of revolution, even in the shallowest sense possible, the capitalists are advertising the struggle against capitalism itself, yet I think the manufacturers (who would probably rather view themselves as someone simply building their own business and making a living, rather than a link in the global capitalist network) are probably too short-sighted to care.

In any case, I certainly believe that whoever has managed to pull this off deserves a reward. Nothing in the communist world, not even the Stalinist regime of terror and political repression, claiming to act in the interests of socialism – and thus humanity – has managed to get away with such blatant irony. Those behind the manufacturing of these products have exemplified something fascinating: they have clearly demonstrated capitalism’s remarkable ability to sell you absolutely anything, even the face of its greatest opposition.

The photo featuring the San Pellegrino bottle was provided by Фёдор Гусляров of Wikimedia Commons. Below is a link to the photo (first) and its license (second):